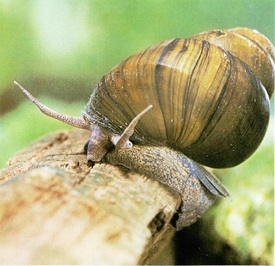 The Chinese and banded mystery snails are large, invasive snails in the Viviparidae (which means they give birth to live young) family.  Chinese mystery snails are native to southeast Asia and eastern Russia, while banded mystery snails are native to the southeastern US (hence the georgianus species name).  Both can be found in lakes and slow-moving rivers or streams, with the Chinese preferring soft sediments like silt, sand and mud, whereas banded are habitat generalists.  They are two of the most common aquatic invasives found in Wisconsin (Latzka et al. in prep).

Much like many other aquatic invasives in Wisconsin, they are primarily spread by recreational boaters. Once individuals are removed from a lake, most species will die in several hours or days, but mystery snails have an operculum that completely seals the shell opening.  This allows Chinese mystery snails to survive at least 4 weeks of air exposure (Havel 2011), making their transport to a new waterbody likely. 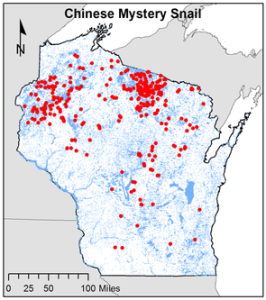 The impacts of these snails are not very well-studied.  Some other native snail species do not frequently occur with Chinese mystery snails (Solomon et al 2010).  Experiments showed the abundance and biomass of native snails decreased when Chinese mystery snails were present (Johnson et al 2009).  However, these impacts are not likely to be common, and are less extreme than those of other Wisconsin invaders like rusty crayfish and zebra mussel.

Past projects at UW-Madison have investigated mystery snails impacts on native snail communities and their interactions with invasive rusty crayfish (Johnson et al. 2009, Solomon et al. 2010). Missouri State University professor John Havel is leading research at UW’s Trout Lake Station further investigating these snails’ biotic relationships.  Additionally, along with UW/WDNR research scientist Susan Knight, Havel is researching the sensitivity of these snails and other invasives to desiccation during transport between lakes.  Other projects focus on the distribution and spread of these snails, with the aim of predicting lakes that are most vulnerable to their invasion and impacts (Latzka et al. in prep, Papes et al. in prep).