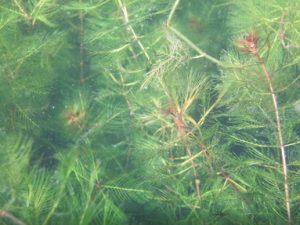 Eurasian watermilfoil, or EWM, is a submersed aquatic plant native to Europe, Asia, and northern Africa. It is a fast-growing, cosmopolitan species, and was quite popular in horticultural plantings in the early 20th century. It was first collected from the east coast of North America in 1942 before it soon spread across the continent. Natural populations were recorded on the west less than ten years later (Couch and Nelson, 1985). It is now one of the most widespread invasive aquatic plants in North America.

The first record of Eurasian watermilfoil in Wisconsin was collected on Lake Mendota in Dane County in 1962 (Wisconsin State Herbarium, 2013). The species has progressively moved northward and is now present in 653 Wisconsin lakes and rivers (Wisconsin DNR, 2013). Clonal expansion is the plant’s most important means of spread on a local scale (Madsen and Smith, 1997). EWM also reproduces using vegetative fragments—a single node is all that is required to produce a new plant. Thus, long-distance spread of vegetative fragments can be aided by transportation of fragments on boat propellers and trailers (Johnstone et al. 2003). 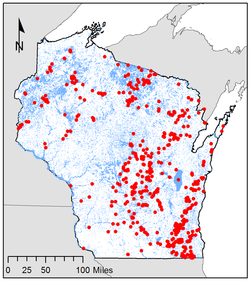 Eurasian watermilfoil is tolerant of environmental stress, human disturbance, and a broad range of physical and chemical conditions. Thus, it is capable of living in many Wisconsin waterbodies. However, its competitive ability is enhanced in lakes with moderate-to-high levels of nutrients and moderately turbid water (Smith and Barko, 1990). In these environments, the plant grows to the surface and creates dense mats that shade organisms underneath. However, while it is capable of living in many lakes and slow-moving rivers in Wisconsin, it will likely dominate only a small percentage of those systems (Hansen et al. 2013). 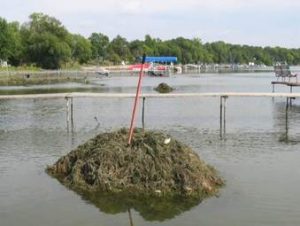 Eurasian watermilfoil has economic and ecological impacts. Because of its dense, surface-matting growth form, the species presents a nuisance to recreation. In fact, the plant has been associated with decreased property values in the northern part of the state (Horsch and Lewis 2009). It also has ecological impacts: an increase in EWM abundance has been linked to the decrease in diversity and abundance of native macrophyte species (Madsen et al. 1991; Madsen 1999). Few impacts on fish have been recorded, although an increase in the trophic diversity of secondary consumers has been noted with invasion (Duffy and Baltz 1998; Kovalenko and Dibble 2011).

Scientists at the UW-Madison are working to understand the reasons certain lakes support abundant populations of EWM. By looking at the environmental conditions in lakes with high EWM growth, scientists are attempting to predict which uninvaded lakes are at high risk for large, nuisance-level populations. These predictions would help us plan prevention and management to most effectively combat the invader.

Madsen, J.D. 1999. Predicting the invasion of Eurasian watermilfoil into northern lakes. US Army Corps of Engineers Technical Report A-99-2. PDF