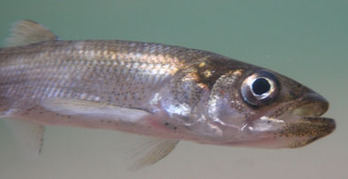 In rainbow smelt’s native range of northeastern North America, the species is anadromous, meaning that it normally lives in marine systems, but moves into rivers to spawn. Rainbow smelt were intentionally introduced into Crystal Lake in Michigan almost a century ago, and spread through the upper Great Lakes during the 1920s and 30s. They subsequently dispersed into inland lakes, and now inhabit portions of Mississippi and Hudson Bay drainage systems (Franzin et al. 1994).

Smelt continue to colonize Wisconsin’s inland lakes, and currently occur in at least 25 inland Wisconsin lakes (Mercado Silva et al. 2006). While smelt are capable of dispersing through river networks, smelt in Wisconsin are associated with lakeshore development, indicating an important role for human introductions (Hrabik and Magnuson 1999). There is anecdotal evidence that anglers have intentionally introduced rainbow smelt into northern Wisconsin lakes. Another potential factor is the unintentional introduction of fertilized eggs into lakes while cleaning and processing smelt collected from other lakes. 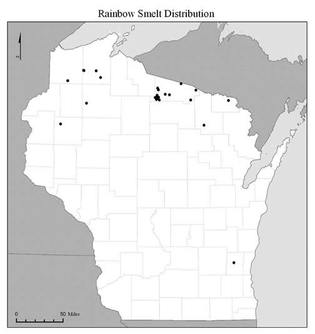 While rainbow smelt generally prefer deep, unproductive lakes, they can inhabit a wide range of lake types (Evans and Loftus 1987). Mercado-Silva et al. (2006) estimated that over 500 lakes in Wisconsin are suitable for smelt invasion, indicating that there remains great potential for further spread of this invasive fish.

A recent project at UW-Madison has aimed to control populations of rainbow smelt in Crystal Lake (Vilas County, Wisconsin) using a novel approach. Several large mixing devices called GELIs have been deployed in Crystal Lake in 2012 and 2013. Mixing action of the GELIs cause the depths of the lake to warm – thus the intent is to exceed the thermal limits of rainbow smelt (Gaeta et al. 2012). Results to date indicate that a small number of rainbow smelt have been able to withstand the warm temperatures, indicating that this may not be a viable control strategy for this harmful invasive species.