The first SWF population in Wisconsin was discovered in 2003 in the Gile Flowage (Iron County). The UW Center for Limnology (CFL) discovered the second population in Northern Wisconsin in Stormy Lake (Vilas County) in 2007. In 2009, the UW CFL detected the spiny water flea in each of the Yahara Chain of Lakes (Mendota, Monona, Waubesa and Kegonsa) in Madison. These inland lakes act as a source of spiny water flea propagules to nearby, susceptible lakes; facilitating it’s spread across Wisconsin. 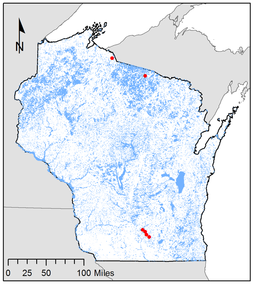 Though the spiny water flea is small (10-20 mm as an adult) compared to other aquatic invasive species, its impact as an abundant predatory zooplankter can be quite large. It has been estimated that the Lake Huron spiny water flea population consumes more zooplankton than all the fish and other invertebrate predators in the lake combined (Bunnell et al. 2011). Because of this, zooplankton biomass and biodiversity is often dramatically reduced in invaded lakes (Yan et al. 2002,

Barbiero and Tuchman 2004, Strecker et al. 2006). This reduces the zooplankton prey available to native fishes and reduces the grazing pressure on algae by zooplankton, which negatively impacts water clarity (Strecker and Arnott 2008).

In Lake Mendota, managers rely on the large algae-grazing zooplankter Daphnia pulicaria to maintain clear waters despite high algal production due to large amounts agricultural run-off into the lake. Since the spiny water flea invasion, Lake Mendota has seen a 95% reduction in D. pulicaria abundance and, in turn, a one-meter decrease in Secchi depth (Figure 1). Researchers at the UW CFL are investigating the adverse effects spiny water flea will have on water clarity management in a highly agricultural landscape.

Barbiero, R., and M. Tuchman. 2004. Changes in the crustacean communities of Lakes Michigan, Huron, and Erie   following the invasion of the predatory cladoceran Bythotrephes   longimanus. Canadian Journal of Fisheries and Aquatic Sciences 61:2111–2125.